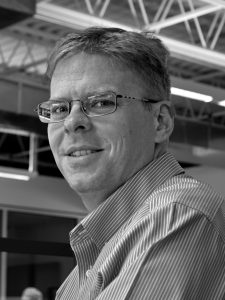 I met Keith Kesner at a monthly educational meeting organized by the Minnesota Concrete Council (MCC) in St. Paul, MN, when he gave a very informative presentation about the American Concrete Institute (ACI) 562: “Code Requirements for Assessment, Repair, and Rehabilitation of Existing Concrete Structures and Commentary”. I then contacted Keith in order to know more about the new Code and its potential use for bridge preservation.

Keith, the chair of the ACI 562 Committee, is a registered Professional Engineer in several States. He has over 20 years of experience as a structural engineer and he has written over 100 publications on a variety of structural engineering topics. He works as a Project Manager with CVM Professional in King of Prussia, PA, a Consulting Engineering firm that specializes in the evaluation and rehabilitation of existing structures.

Founded in 1904 and headquartered in Farmington Hills, MI, ACI is a leading authority and worldwide resource for the development and distribution of standards, technical resources, educational training and certification programs related to concrete design and construction. ACI has over 95 chapters, 110 student chapters, and nearly 20,000 members spanning over 120 countries.

Could you speak of the goals of ACI and introduce the ACI 562 Concrete Repair Code that you chair?

ACI is an international organization with the objective of developing and distributing knowledge on concrete design and construction. Some of the key goals of the Institute include the development and maintenance of standards and consensus documents for the design, construction and repair of concrete structures.

People are probably most familiar with ACI 318 Building Code, which is the US Standard Code for reinforced concrete construction. ACI 318 is also very heavily used internationally.  ACI has produced a wide variety of other documents, such as specifications and procedures for concrete construction in different types of environment, from hot to cold weather, development and standards for the use of Fiber Reinforced Polymer (FRP) materials and the repair of concrete structures.

ACI has much wider reach than what people are most familiar with, which is ACI 318.  It is a very large organization that covers all aspects of concrete construction.

Who are the professionals that are part of the ACI membership? Does ACI mainly gather Consulting Engineers?

Consulting Engineers are a prominent presence in ACI, but other groups of professionals are also strongly represented in the Institute. These groups include cement producers, concrete producers, manufacturers of construction products, contractors focusing on concrete construction and repair, and academics involved with research on the design and construction of reinforced concrete structures. ACI has a very broad-based membership that touches all aspects of the concrete industry.

The ACI 562 Code was developed to be a parallel document/Code to ACI 318. Whereas ACI 318 deals with new building construction, ACI 562 was developed specifically for the repair of existing concrete buildings. It was also designed to work with the International Existing Building Code (IEBC).

ACI 562 was designed to be a performance-based code with prescriptive requirements when required. It basically provides design professionals with code requirements for the assessment of existing concrete structures and then, depending upon the results of the assessment, procedures for the design of appropriate strategies for the repair, including durability requirements.  The code also calls for future maintenance and monitoring requirements to be documented by the licensed design professional for the owner.  However, ACI 562 cannot mandate that actual maintenance be performed.

Yes, ACI 562 is a completely new Code. The first edition was published in 2013. The current ACI 562-16 edition, which was published last year, is an update of the 2013 version. So we are currently on the second version of the Code.

Is the 2016 update significant?

Yes, the Code was updated significantly from 2013.  We made a lot of changes to the terminology to make it consistent with documents published by other standard developing organizations. We added code requirements and commentary on these requirements to better define the level of repairs that may be required on existing structures. We worked on better integrating the Code with IEBC requirements.  We also spent a lot of time working on requirements for the bond of the repair material to the existing structure.

A major update entailed the introduction of the concept of “demand to capacity ratio” in order to better delineate the extent of the repair that may be required in a building.  As an example, let’s suppose that we have a beam with a load of 100 kips, as specified by the building Code. If after evaluation we find out that the capacity of the beam is, let’s say, 80 kips, we can calculate the demand to capacity ratio by dividing 100 by 80 = 1.25.  Being the ratio  greater than 1, the beam requires strengthening and the repair must be designed in order to provide the amount of strengthening that will bring the ratio back to or lower than 1.00.

Does the Code include guidelines on how to evaluate the capacity of a concrete structural element that has deteriorated over time?

Yes, this information is contained in Chapter 6 of ACI 562, which deals with how to do the evaluation of a deteriorated structural concrete element. There are a lot of documents that have been published on the evaluation of existing concrete structures, which are referenced in the commentary to the Code. Design professionals using the Code can look up to these documents and can get additional information on how to evaluate the current capacity of existing concrete structures.

Where did the need for the new ACI 562 Code stem from?

The need was really recognized by people involved with the concrete repair industry, who realized that repairs on existing structures were not performing adequately. A thorough investigation was carried out by a couple of different groups: the US Army Corps of Engineers and the Building Research Establishment (BRE) in the UK. Both reports (see linkage, ed.) concluded that repairs of concrete structures were failing at a high rate. Improved repair techniques providing better performance of repairs were needed in order to avoid repair of previously repaired structures, which is obviously a waste of money.

The ACI 562 Code was specifically developed for building structures. A direct translation of many of its parts to bridges would not work since loads and resistance factors are different in bridges compared to buildings. However, the performance-based concepts that were used in the development of the ACI 562 Code can be appropriate for bridge structures.

A lot of the problems with durability of repairs relate to the addition of new materials, that have different electrochemical properties and stress-strain response than the existing materials. We must predict how these new repair materials are going to interact and respond when they are applied to the original structure. The comprehensive concrete repair concept will likely fit with current practices adopted within bridge preservation as part of an asset management program.

Would ACI consider the possibility to collaborate with TSP2 for the development of a performance-based specification for concrete repair?

Yes, absolutely. I would also suggest looking into ACI 365 Committee – Service Life Prediction, which is working on developing service life prediction standards and procedures for concrete structures. Some of the work that has been already done by the 365 Committee may be of great interest to engineers and practitioners who deal with bridge preservation.

ACI Committee 563 is also in the process of developing specifications for repair of existing concrete structures.  The concrete repair specifications should be completed in late 2017 or early 2018.