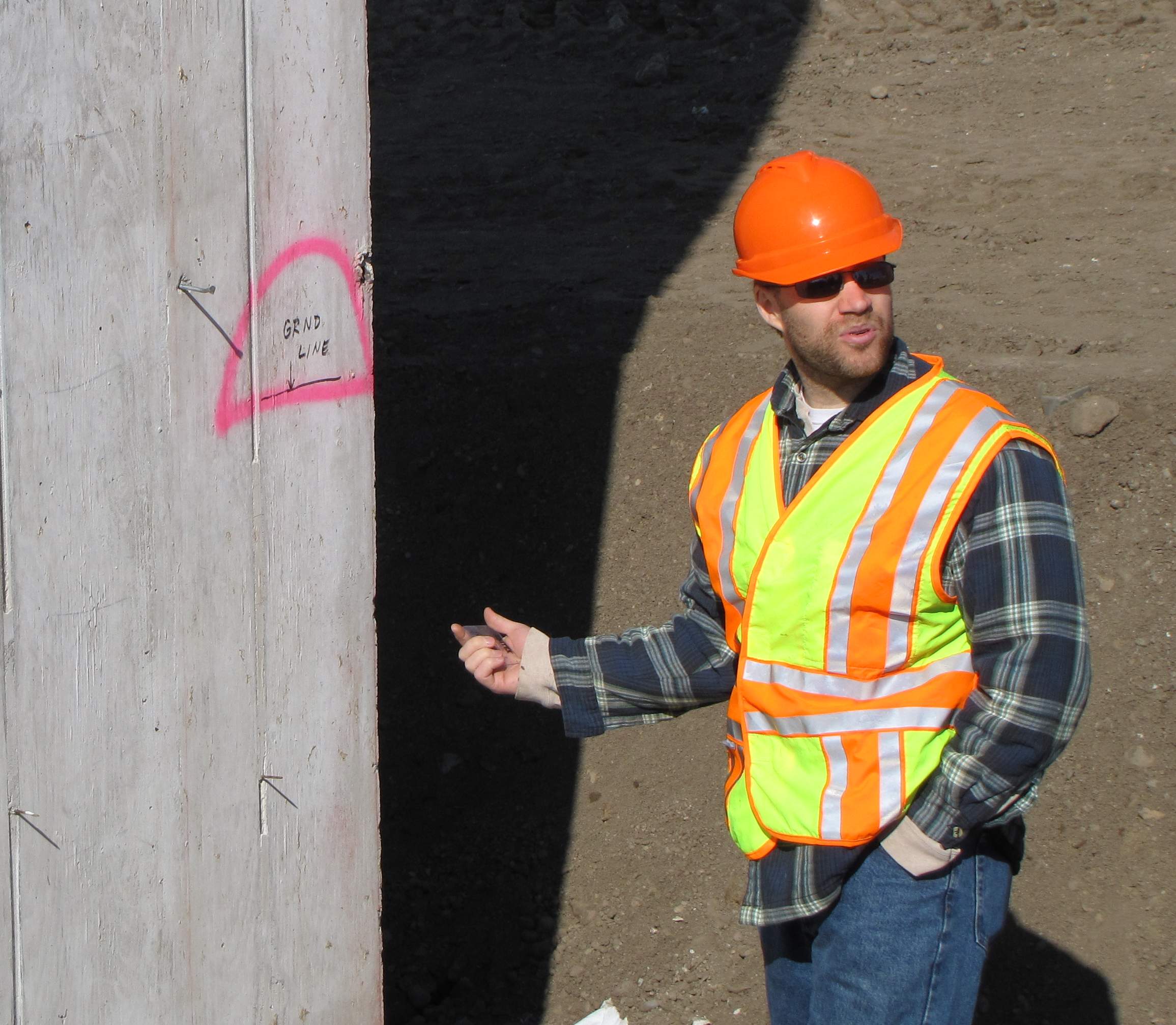 I met Ed Lutgen Regional Bridge Construction Engineer with Minnesota DOT (MnDOT) at the Bridge Office in Oakdale, MN. We had a long conversation about bridge preservation strategies with the DOT and its implementation policies. 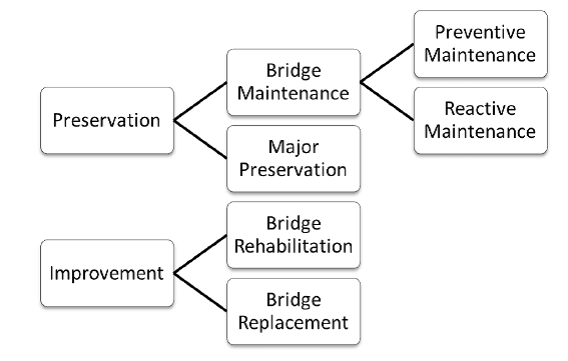 Since we were not doing many rehabilitation projects as defined in the previous system, we included Bridge Rehabilitation into Improvement. Within Preservation we also made a distinction between Bridge Maintenance and Major Preservation.

Preservation entails repairing deteriorated bridges with no significant change to their geometry or increase of load carrying capacity.  In a nutshell, it means preserving what is currently in place.  Concrete repair and cathodic protection are examples of typical preservation activities. Usually a preservation project is not meant to last more than 10-20 years and does not require bringing the bridge up to new design standards. However the bridge must comply with safety standards.

On the other hand, improvement applications entail modifying the geometry of the bridge and/or increasing its loading capacity. Rehabilitation projects are meant to last 50 years or longer and must meet specific design standards. Replacement projects have higher design requirements since they must meet full standards.

The Bridge Condition diagram is the focal element of the guidelines. It has been designed to be in line with AASHTO Subcommittee on Bridges and Structures (SCOBS) recommendations with regards to flow and targets to meet. However, we adapted the diagram to MnDOT bridge preservation classification and we linked it to National Bridge Inventory (NBI) General Terms. As a consequence, Bridge Maintenance (Green Code) entails NBI from 7 to 9, Major Preservation (Yellow Code) from 5 to 6 and Improvement (Red Code) from 4 to 0. 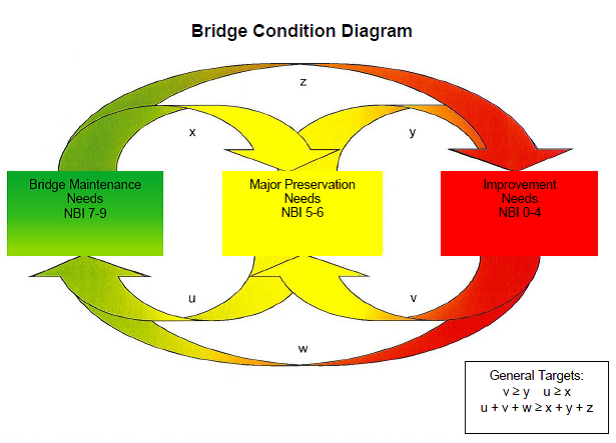 As an example, if a major preservation project entails spending 80% of the cost of a new bridge, then the project does not meet the criteria indicated in the table. According to MnDOT, a costly project should provide more benefits than limited service life improvement and no increase of load carrying capacity. In other words, we do not want to spend 80% of the cost of a new bridge without significantly affecting key parameters such as service life, load carrying capacity and bridge geometry. However, there are exceptions that are evaluated case by case.

The first step entails bridge safety inspection and NBI ratings, which are under the responsibility of District engineers. In Minnesota we have 8 Districts, each managing between 200 and 1500 bridges.

Data from the Districts is introduced in the Bridge Replacement and Improvement Management (BRIM) software program, which compiles the conditions of all bridge elements and calculates the probability for bridge service interruption.

BRIM uses deterioration curves to project bridge conditions out 20 years into the future.  We developed 6 different deterioration curve models for bridges in our State. In projecting MnDOT bridge inventory into the future, BRIM identifies bridges that are candidates for preservation or improvement projects. The software uses engineering logic and a data base that includes conditions and other critical factors, such as Average Daily Traffic (ADT).

In summary, in a 20-year period BRIM is able to project the time frame for a particular bridge to be repaired and it also recommends the type of repair, whether rehabilitation or preservation.

Every year District engineers evaluate the BRIM output and make an intelligent decision on whether to advance or push back bridges in the priority list. This decision is taken in conjunction with the Bridge Office. As an example, we can foresee that a remote bridge will last longer than expected because it does not get a lot of wear and tear and de-icing chemicals are seldomly used.

Once a Bridge Performance Index (BPI) is established for each bridge, the next step of the process entails a spending evaluation through State Transportation Improvement Program (STIP). In essence, this is a funding mechanism that allows knowing what we will be spending for each bridge in 4 years before letting.

In order to avoid focusing on riskier bridges only, the BPIG recommended output should include 50% replacements, 25% rehabilitation and 25% preservation projects. This criteria prevents us to go back to the “worst come first” criteria, which is not in line with an asset management strategy.

Not all the Districts can meet the 50-25-25 criteria though. In the metro areas we are going to have a major bubble of rehabilitation projects in the coming years. I-94, which was built between the 60ies and the 70ies, has bridges that are becoming 50 years old. Since we cannot do all the necessary rehabilitation projects at one time, we are implementing preservation strategies in order to extend the service life of critical structural elements, such as bridge decks.

In the late 70ies and 80ies we did an overlay program that entailed overlaying 90% of our bridges decks with 2 inches of low slump concrete. In the last 5 years we have started re-overlaying bridge decks as part of a bridge preservation strategy. We have seen between 20 and 30 years of extended service life for low slump concrete overlays. However, an old deck with black bars is sometimes not worth another overlay. We also do not want to improve the deck of a bridge that has a 100-year old substructure. Ideally we would like all the different bridge elements to end at the same time.

The service life of rural bridges is on average longer than in the metro area where traffic demand requires the implementation of a significant number of rehabilitation and replacement projects.

Service life of bridges that belong to the County system is even longer than DOTs. Because of limited funds, Counties must allow bridges to get into conditions defined by low NBI rates, which, in some circumstances, can cause bridge service interruption.

With few exception, such as Hennepin County, City of Minneapolis and Duluth that have preservation procedures in place, Counties are in a reaction mode and adopt a “worst comes first” policy, which is mainly focused on bridge replacement.

District engineers calculate cost of projects in the BRIM – BPI output list that are related to their region and the 4-year program.  To do so they use a cost estimated worksheet that is included in the Guidelines. Once the cost of each project is defined, the information is introduced into the STIP, which provides the amount of spending by year and, as a result, defines the number of projects that can be implemented.

About one and half year before the letting, one of the Regional Bridge Construction engineers performs a field site visit together with a District engineer.  They walk individual bridges and complete a field review. This only entails preservation and rehabilitation projects, not replacement. A safety inspection is also performed.

For routine inspections, all non-culvert bridges are inspected every 24 months. If a bridge is classified NBI 4 or less (poor condition), then it gets inspected every 12 months.

Approximately one year from the letting, the Regional Bridge Construction engineer writes a recommendation report for preservation and rehabilitation projects. The report specifies actions to be taken but also includes information about estimated quantities. Basically the report works as a preliminary plan.

Once the recommendation report is signed off by the Districts, it comes back to the Bridge Office where design engineers start developing the contract plan and special provisions.  All repair recommendations reports are written by one of the four Regional Bridge Construction engineers, thus creating consistency between the reports and providing a level of quality control.

Districts also evaluate whether certain actions can be implemented by their own maintenance force. Each District has from 1 to 5 maintenance crews for a total of 190 bridge maintenance workers around the State. District maintenance crews usually perform jobs such as deck crack sealing, bearing greasing, concrete repair or joint replacements. Some Districts are able to perform more complex work, such as Accelerated Bridge Construction (ABC), overlays, painting, gusset plate replacement and even bridge replacements.

A project can encompass a number of bridges. We are about to start the North Lowry tunnel project, which includes 52 bridges from Nicollet Ave to Shingle Creek on I94. Out of the 52 bridges only 1 entails rehabilitation, the other 51 concern preservation for a total of $15 M. We are planning to do patching, overlays, concrete repairs, delamination removal, Fiber Reinforced Polymer (FRP) and Glass Fiber Reinforced Polymer (GFRP) applications. These last two technologies will be used as strengthening system but also to make repairs last longer in areas close to traffic where there is salt spray.

For a major project like this we hired a consulting engineer, to help with field investigation and preparing the final design. Repair recommendations for all bridges were developed by a Regional Bridge Construction engineer.

Once a contract is awarded, the Regional Bridge Construction engineers support the contractor for any questions or issues they may have.

At contract completion, bridges can be upgraded according to NBI rating. However they can also maintain the same ratings.

We are proud of the restoration of the Lester River Bridge over the mouth of the Lester River along Lake Superior shoreline, which was built in 1924-25.  It is a beautiful arch bridge that is considered as a gateway to the North Shore. It has masonry abutments and side walls over the concrete arch.

Due to the high level of chloride contamination, we had to remove all masonry down to the top of the arch and apply a comprehensive cathodic protection system that included a variety of solutions suited to different conditions. In addition to design standards, we met the standards from historic preservation.

We consider TSP2 as an organization that can help us get information about new products and technologies for bridge preservation and rehabilitation, especially in relation to service life extension and cost-benefit. We are also interested in knowing of other States’ experience with new technologies, in particular in the Midwest.

We have started using other innovative technologies, such as micro and macro fibers in casting decks and epoxy chip seal especially, in situations where we have deck cracking.

We are doing Accelerated Bridge Construction (ABC) and we are addressing mass concrete issues.

In addition to new products and technologies, we are also interested in getting information about prioritization of applications in other DOT States and successful solutions that solved specific problems.

2 thoughts on “A Conversation with Ed Lutgen MnDOT”